The Problem of Method

In its most general usage, “method” refers to the procedure and technique used to carry out a task, to obtain and implement knowledge, and to evaluate results.

Method is the term Western civilizations use to refer to such procedures. In Ancient Greece, the word kanon meant “example” and “method”, and was translated from Greek to Arabic as qanun, meaning rules and principles. I. Kant, the famous German thinker from the Enlightenment, defined kanon as “the sum total of the a priori principles of the correct use of certain cognitive faculties in general.”

When it comes to method, further questions are needed for clarity and to make a better definition: “Method of what?” or “Method concerning what?” The method of an object, an event, a fact (or relations with those)? Or the method of a process and an action, of the creation of knowledge?

The main question relating to method is “How?” The inquiries of “how to do, how to know, how things emerge, how to implement” and the like are all aimed at understanding method.

People turn to, show an interest in and relate to their environment within the context of their needs, and the relationships they form, in turn, affect, change and transform their environment. When people’s natural abilities are sufficient to change their environment and make it their own, there is no problem of method, and no search for, or awareness of, a method. When, on the other hand, people face obstacles preventing them from satisfying their needs or reaching their goals, they start searching for “know-how”, which is a search for method. This is the beginning of the process of trial and error. People develop tools and information, as well as the ways of implementing them, to reach their goals, which leads to an awareness of this process, and to the creation of a method. In this sense, method is anchored to the human consciousness. In other words, method refers to the awareness of people of what they do.

People, however, do not stop there. In the next stage, with an awareness of their subject status, they turn to their interests and relationships, and to the act of showing interest. This is reflective thinking, thinking about one’s actions and holding oneself to account for one’s actions. This level, where method is questioned, is also the level at which philosophy emerges. As method is born out of life, the questioning of method is also a questioning of life. In this sense, philosophy is a continuous search for a method, and the history of thought is the history of the methodical questioning of life.

People’s natural, bodily needs require direct satisfaction; in other words, direct relationships. At the level of intellectual or rational needs, on the other hand, interests multiply and go beyond being direct. What makes a person a subject is thinking on their interests, which is method. The diversity of interests at a rational level overcomes the unity of method, and creates a multiplicity of methods.

The “manner” or the method of relating to existence determines the type and discipline of the knowledge to be produced. The methods of “experimentation, observation and measurement” produce Science; the methods of “aesthetics and image” produce Art; and the methods of “language, thought and conceptualization” produce Philosophy.

Whatever exists in nature and in the environment exists “singularly” at a sensory level. When single objects are perceived via the senses, what we know is only their appearances. Relating these singular objects of existence to a universal or general “law” gives rise to “conceptual thinking”. Thus, its “relationship with law” is what shapes the method of conceptual thinking. What turns knowledge of perceptual appearances into scientific knowledge is this relationship with law.

Defining the concept of “law” –being nomos in Greek and namus in Arabic– would further clarify the issue.

“Law” refers to the necessary, objective and causal internal relationship between real objects, events and facts, and the relationships that regulate, change and improve them. Laws can be particular (applying to singular or particular facts), general (applying to facts of the same type) or universal (applying to all facts). For laws to operate in the objective world, temporary external relations, known also as conditions, are also required, but no condition can generate events or facts without “objective internal laws”.

Consequently, “action” is considered to be the source and foundation of all methodical knowledge; this is because the word “action”, defined as “conscious and purposeful activity”, defines the method. Thinking is also methodical, and follows the laws governing the organ of the brain, linguistic system and logic.

At its most general level, method has two aspects: 1- theoretical and 2- practical; and four levels: 1- existence, 2- thought/knowledge, 3- expression/transfer, and 4- trial/implementation.

The common determinant of all methods is the “quality” of “knowledge”. A simplified model demonstrating the emergence of knowledge would be as follows: 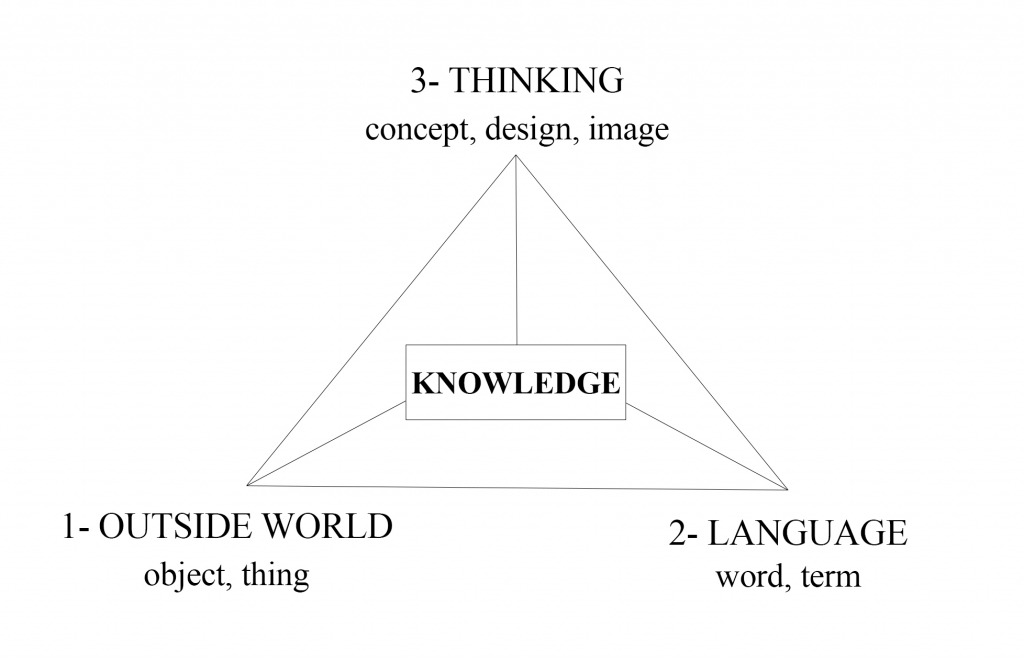 Your philosophical attitude is determined by the relative emphasis you place on the fields in this model.

Philosophical knowledge refers to meanings that are attributed to its concepts in the context of disciplines, which are systems of concepts. The character of philosophical discourse gives it the ability to examine, explore and question itself.

Art, on the other hand, is a marriage of concept and work. In other words, art involves the merging of theoretical, ethical and aesthetic values with work. It is the internal discipline of art that creates its ethics. Art is produced through and can only be perceived with sensitivity, and so sensitivity can be developed by engaging in the arts.

The degree to which culture –originally a form of non-conscious transfer– is refined through science and philosophy, determines a society’s level of civilization.

Concept emerges as a common and necessary tool in all disciplines, and constitutes the creative foundation of all manner of cultural objects. Concept is the most important instrument of thought in efforts to comprehend and understand what exists, whether in the outside world, in thought or in language. Concept is essential to all acts of understanding, expression, communication and getting through.

Prior to conceptualization, thoughts are subjective and blurry, which is why philosophy examines “concepts”, as, arguably, the real carriers of meaning.

The environment in which concepts emerge is the environment of thought, and the outside world and language both play a role in this emergence. According to Plato, sophists and philosophers adopt opposite perspectives; sophists, in principle, confine themselves to the appearances of things rather than their essence, and base their knowledge on appearances. Philosophers, on the other hand, do not confine themselves to appearances, and search for the essence or essential quality of things.

Following on from Plato, the German thinker Hegel also places emphasis on concept (as method). According to Hegel, appearances that are registered through our senses contain sensory knowledge of the “here and now”. That said, nothing is stable, and everything keeps changing. Such appearances provide us with consequences without process, and consequences without process are meaningless. Placing objects, events and facts within a process involves dialectical thinking, and processes can only be known through “concepts”. In Hegel’s usage, “concept” is an act of thinking that shows processes, that unearths the unity of opposites, and that gradually changes and develops to become a universal system. As is the case with facts, the content of concepts is their processes.

Method emerges as a problem because, in addition to being a way of making sense and acting, it also limits and conditions the mind. All propositions take the form of singular, absolute methodical views that explain everything. However, as Derrida argues, “Every theory has a fate; there is something that the theory is capable of explaining, after which they leave the scene”. To him, all theories are temporary.

All methods should be open to other methods and attempts. Thomas Kuhn rejected Kant’s idea that “universal categories affect knowledge”, instead arguing that “social paradigms and epistemic communities affect knowledge”. Kuhn argued further that scientific explanations change over time, and from culture to culture.

Einstein famously said, “Don’t ask scientists about their methods; they are almost always bound to be wrong.” Einstein was not arguing for a lack of method, but was making the case that sticking to a specific method is wrong. Einstein is right; as were he to follow the methods that existed at his time, would he have been able to create his theory that overturned all current worldviews and introduced a new dimension to consciousness and life?

To learn, teach and implement the existing knowledge, it is necessary to follow the existing method that produced it. However, going after new horizons of knowledge requires finding new methods.

As this discussion clarifies, the problem is not with the methods, but with the minds that seek to turn them into dogmas to the exclusion of all others. This is a problem of attitudes. Accordingly, individual researchers would be well-advised to multiply their theories, to compare their theories with the opposing theories, and to recognize that engaging with a diversity of views enriches their theories.

In the words of Ahmet İnam: “Existing methods are like roads already travelled, roads that you left behind. Humans are bundles of possibilities; doing what they can is the basis of their ethics.”

Method expresses a certain program, a pre-defined design. In this sense, method serves as a “rational” defense. Knowing is not always limited to clear and conceptual expressions, nor even to the consciousness. People know a lot more than they think they know. Manifested knowledge is the tip of the proverbial iceberg of latent knowledge.

For example, wise people have turned life itself into a method, with intuition through living together (as masters and apprentices) being their way of discovering “latent knowledge”. This, in a sense, is an unmethodical method. On this traditional path of wisdom, people interact not only with their minds, but with their entire being, and enjoy the agility of continuous discovery through intuition by being one with life and nature, without positioning their minds as passive observers of life. They live directly, without mediation. The method for wise living is unique and specific to each individual. The path followed by a wise person is nothing but the total sum of their life; there is no path to follow other than that of their life. The multidimensional nature of method is a reflection of the multidimensional nature of life itself.

Today, scientific living means methodical (rational) living. In this sense, knowledge of how to live requires certain “know-how”. This is what technology forces upon us, and as a result, societies that do not produce technology become dependent on others. To cite Ahmet İnam one more time, “Societies that are one with their cultures do not have a problem of method.”

In short, method is learned by doing.

* First published in Us Düşün ve Ötesi (Reason, Thought, and Beyond), no.4, 2000. Translated by Dr. Emre Eren Korkmaz, and revised by the editorial board.